The results are in: Americans spent a LOT on plastic surgery! It was predicted in 2013 that more and more Americans would continue to undergo cosmetic procedures, and that that they have! The American Society of Plastic Surgeons has released new data it compiled throughout 2014, and the findings are very comprehensive. Some are old and some are new… but all are interesting!

Approximately 16 MILLION cosmetic surgery procedures were performed in 2014. This number includes cosmetic surgery (1.7 million), minimally
invasive procedures (13.9 million), and reconstructive procedures (5.8 million). Overall, this was a 3% increase from 2013, as well as the largest number that has been recorded thus far. These 16 million procedures equated to $12.9 BILLION spent: Beauty doesn’t come cheap!
As can be expected, women were the vast majority of cosmetic procedure patients (92%). For the ninth year in a row, breast augmentation was the most requested procedure. Rhinoplasty, blepharoplasty, facelifts, and liposuction were the runner-ups in the popularity contest! In terms of minimally invasive procedures, Botox and injectables reigned supreme; both women AND men love their instant results!

Speaking of men, don’t think guys didn’t visit plastic surgeons! There was an increase in men requesting cosmetic procedures, too, and rhinoplasty was the most common. Interestingly, there was an increase in lip reductions and augmentations for both men and women, and sources say this likely attributes to celebrities (Kylie Jenner, for example) and social media. Although teens and young adults make up a large majority of these platforms’ audience, they were the smallest group in terms of percentage to undergo cosmetic surgery. Middle-aged women– between the ages of 40 and 54, specifically — were the majority.

There is a reason these numbers keep growing! Even though the Fountain of Youth hasn’t officially been found, plastic surgery technology is rapidly improving. Visit an experienced plastic surgeon to find out your anti-aging options — and soon enough you will be part of next year’s growing statistics! Why is it that almost everyone is okay with going to the dermatologist — there are even celebrity “derms” that people clamor for! — but many are self-conscious about seeing a plastic surgeon? Perhaps this is because the media portrays dermatologists as miracle workers who “fix” all sorts of skin and cosmetic issues! Magazine editors and celebrities note that it has become de rigeur to have a dermatologist on speed dial — especially once you’ve hit 30!  On the other hand, the media portrays plastic surgeons as the ones to avoid.  After all, it’s the plastic surgeons who provide unnatural and sometimes even downright scary results, right?

Well, let’s examine this media myth a bit more closely!  Wherein lies the truth?  Who is it that is making the majority of the overly-plumped cheeks, the bobble-head faces, and the frozen, over-Botox-ed foreheads?  Well, it stands to reason that if most people see dermatologists for fillers and injectables, these unnatural and overdone results are mainly coming from dermatologists, based purely on statistics!

If you are contemplating an anti-aging procedure, trust your face to a facial plastic surgeon who employs an integrative approach to providing natural results using a combination of non-surgical and surgical treatments.   Long gone are the over-pulled, windswept facelifts of yesteryear.  Dare to discover the subtle and meaningful results of a stepwise and combined approach! Eyes: They are the focal point (no pun intended) of your face. You can dress them up with makeup, but if you have serious cosmetic problems in your eye region, you probably look older than you should! Dr. Michelle Yagoda sees all different types of patients who would like to look younger and more refreshed, and, oftentimes, it is all in the eyes! Eyelifts provide permanent and natural solutions to various eye problems and concerns. Think about getting a blepharoplasty – or eye lift – if you… 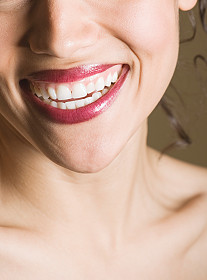 The Genetics of a “Gummy Smile”

When you smile, do you see just your teeth, your teeth and a little gum, or mostly gum? If it is the latter, you can thank your genetics! Many people find themselves bothered by a “gummy smile.” Often due to small teeth, a short upper lip, or excessive gum tissue, there is a way to correct the proportions.

Surgery, called a gingivectomy, used to be the most common corrective treatment. Although effective, it can be costly and painful. Now, many plastic surgeons use Botox! By injecting Botox into the upper lip to paralyze the muscles — and prevent them from rising so high — gummy smiles become just smiles.

Dr. Michelle Yagoda has over twenty years experience working with gummy smiles, and the results are always gorgeous and natural!

With the holiday season coming to a close, gift trend reports are coming in. What was one of the biggest gift-giving growth margins of 2013? Plastic surgery! According to major news channels, the gifting of cosmetic surgery increased 25-30%. This included both cosmetic surgeries/treatments and gift cards to be used in plastic surgeons’ offices. The number of procedures done without being given as gifts rose in December, too – which is good, since taking a little time to care for ourselves has been shown to be essential for our happiness. We deserve it!

1.  Botox/Dysport/Xeomin: Excellent for crows feet wrinkles, forehead furrows, and neck lines, these injectables offer quick and completely natural looking results. Although the three are similar, they all have different qualities: Dr. Yagoda will be sure to help you select the one that’s best for you!

2.  Fillers (Perlane/Restylane/Juvederm/Radiesse/Sculptura/Belotero, etc): Fillers “fill” out wrinkles, and they also do more! They are very good at smoothing skin and adding volume to lips,eyes, cheeks and jowls.  They can be used in non-surgical rhinoplasty and chin augmentation and can eliminate the tired look associated with lower eyelid bags.  Dr. Yagoda even offers a non-surgical facelift using fillers that has instant results without the downtime of traditional surgery!

Although the largest gift spike is in December, Valentine’s Day isn’t too far behind! Give a loved one (and yourself) the gift of beauty. You’ll both love your results! It appears that women aren’t the only ones wanting to turn back the clock. 300,000 men in the U.S. had Botox injections last year alone. This growing grooming trend of ‘Bro-tox‘ is not limited to image-conscious metrosexual types. For many men it’s about job security and maintaining a competitive edge in the workplace. But for more and more men (often urged by a wife or girlfriend) the decision to receive Botox and other cosmetic treatments to enhance their appearance may be a sign of vanity. Or is that ‘Man’-ity? Why do you think ‘bro-tox’ is gaining popularity? Visit our Facebook page. We’d love to hear from you! If you are like most people, your holiday social calendar is filled with parties, fundraisers, work events and family gatherings. While some people have taken the time to prepare ahead to dazzle friends, families and colleagues, many of us find ourselves wondering if there is anything we can to in the eleventh hour to stop the clock and turn back the hands of time?  If you work hard at a paying (or non-paying!) job, and want a quick, easy and affordable way to look better for the holidays, here’s what you deserve during your lunch hour:

1.  If holiday photos always seem to capture that dreaded bump on your nose, then ask Dr. Yagoda to make immediate, natural and noticeable changes with a non-surgical rhinoplasty.  This time and cost efficient fix will give you a straighter, more balanced and refined nose. Dr. Yagoda uses injectable fillers to camouflage depressions, eliminate bumps, and even change the appearance of the tip and nostrils—all in a quick office procedure that doesn’t require general anesthesia, bandages, or recovery time.  In addition to looking great, you get to “try on” the results before committing to a permanent surgical result!

2.  If people tell you that you look angry, tired or worried, when you are content and well-rested, it’s time for a treatment with Dysport. This Botox competitor erases crows’ feet, angry lines and worry lines in as early as 24 hours!  Look refreshed and stress-free faster even before you sip that Margarita, under a palm tree in St. Lucia.

3. Gray may be the new navy or the new black, but it is never the new skin color to covet!  If your skin is looking gray and sallow, restore the radiance, and get glowing, clear and tighter skin with a peel.  With no downtime and no pain, this treatment is a must for anyone who wants to wear winter white!

Love the way you look this holiday season and at the same time take comfort in knowing that annoying aunt Sally and your sister-in-law Karen won’t have anything to criticize.  You’ll see the loving grin in your father ‘s eyes when he is equally smitten by your brains and your beauty.  And, who know?  Maybe this time, your boss will pay closer attention when you ask for the raise you deserve!  Happy Holiday!  Enjoy the power of beauty!

Question: Can you correct my thin lips? I don’t want to have surgery and am leaning more towards an injectable filler and am trying to find the longest lasting filler?

Answer: All FDA approved fillers last about 3-5 months in the lips. I don’t recommend permanent fillers in the lips as they tend to migrate over time and cause lumps and bumps.  Lips can be naturally augmented with Restylane, Perlane, LaViv, and Juvederm.

Question: I am a 48 year old woman living in Manhattan and am not ready for a facelift just yet. Are there any non surgical options for facial rejuvenation?

Answer: Absolutely!  You can look younger and refreshed with any one (or a combination) of these non-surgical options: 1. Fillers —Restylane, Perlane, LaViv, Juvederm, Radiesse and Sculptura— can soften nasolabial folds, make cheeks more defined, restore hollowed cheeks and under eye areas, and even make the jawline and chin more prominent; 2. Neurotoxins—Botox, Dysport and Xeomin—can erase the angry and worry lines in the brow, and the crows feet around the corners of the eyes; and 3. IPL — Lasers and Chemical Peels can make the skin tone and texture even and tighter while minimizing fine lines and wrinkles, erasing brown spots, and vaporizing broken blood vessels.  If you are not quite ready for a facelift, but willing to do some minimal surgery that will give you amazing and natural results, consider these two alone or in combination:  1. Liposuction under the chin to get rid of turkey gobble and drooping jowls; and 2. i-Guide neck lift to improve the definition and angle of the neck without any tell-tale incisions at all around the ear.